Fiza Pathan: “If it were not for my social networking and my blogs, many of my readers wouldn’t be reading my books”

Her sixth book ‘Nirmala: The Mud Blossom’ will be a novel about the atrocities faced by the women of her country, India 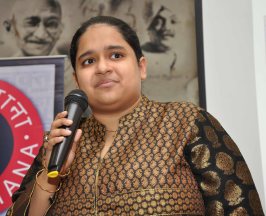 When did you decide to share your thoughts with everybody through writing? Since high school and ever since I read ‘Emily of New Moon’ by L.M.Montgomery, I’ve been interested in sharing my thoughts with others through the medium of the written word. However, I wrote my first book in 2009 when I was in my last year of college. The book got published in 2012 and since then there has been no looking back. It has been an amazing experience to be a writer/poet/blogger. Your first fiction book was S.O.S. Animals and other stories, an excellent book for children. Classics: Why we should encourage children to read them is also one of your recent books. Are children your highest priority like readers? Although I have written three books for children, I wouldn’t say that children are my highest priority as readers. I write a good deal of other fiction and articles which do not really make children as my prime readers. I don’t fit in a niche──I like to explore. That is why my last two published works are for a mature audience, though I enjoy writing children’s books. I would like to be known as an author who writes for children from ages 5 to 95. In addition, your novels and short stories are included in almost all genres, Religious writings being your forte. Why do you always reflect religious topics? Being a devout Roman Catholic as well as being a Theosophist has really made me a writer of religious parables and stories. Religious writing gives me a sense of peace and I feel more fulfilled writing religious literature than any other kind of literature. Also, religion was the first genre in which I discovered myself as a real writer back when I sent my first article to the Catholic weekly ‘The Examiner’ in 2008. I also wrote articles and religious parables in another Catholic magazine called ‘Vision and Venture’ when I was still in college. Religious themes and topics come easily to me because I am very much engrained in my faith. END_OF_DOCUMENT_TOKEN_TO_BE_REPLACED